Have Truth Activists Been Defeated In The Anarchist Movement?

Touring the stalls at the Anarchist Bookfair in London on Saturday, several thoughts emerged.

Firstly, that for all its faults, the Anarchist movement remains vibrant, and in far ruder health than the last century left. As new struggles and debates emerge during the Con-Dem years, Anarchist ideas and agitation will present an alternative, both here and abroad.

For nearly a decade now this blog, Notes from the Borderland magazine and a small group of supporters, has worked to reduce, and where possible eliminate the influence and presence of 9/11 and 7/7 'truth' activists in progressive politics. Conspiracy theory weakens the alternatives we are trying to build to the existing system, and worse encourages a world view based not around the reality of the domination of the class system, corporations, political elites or global capital, but instead a world view that is irrational, illogical and all too often racist.

This blog is proud to have played a small part in bringing that about. Thank you to everyone who has helped us, especially our informants in both the 9/11 and 7/7 'truth' movements. Don't you just love it when a plan comes together?

Posted at 08:17 AM in Exposing Anti-Semitism , Make Wars History, Notes From The Borderland, Other Conspiracy Theories, Reinvestigate 9/11, UK Truth Activists, We Are Change | Permalink | Comments (22) | TrackBack (0)

No Surrender To The Shape Shifting Reptiles!

Once the Shankhill Road in Belfast was known as the heartland of working class Ulster Unionism, Protestantism and everything that put a very large no, into No Surrender!

What are we to make then of the news that on Saturday 25th September the Spectrum Centre on the Shankhill plays host to 'Belfast Wake Up Call'. This is a whole day of 9/11 'truth' activism, 2012 prophesies, analysis of state mind control and exposure of 'global elite paedophilia'. With speakers including Jim Corr and music from Gareth Icke (yes the son of the turquoise one) this promises to be something different from the narrow minded, right wing, conspiracy based view of the world that so often used to pass for politics on the Shankhill?

Welcome to the politics of change. 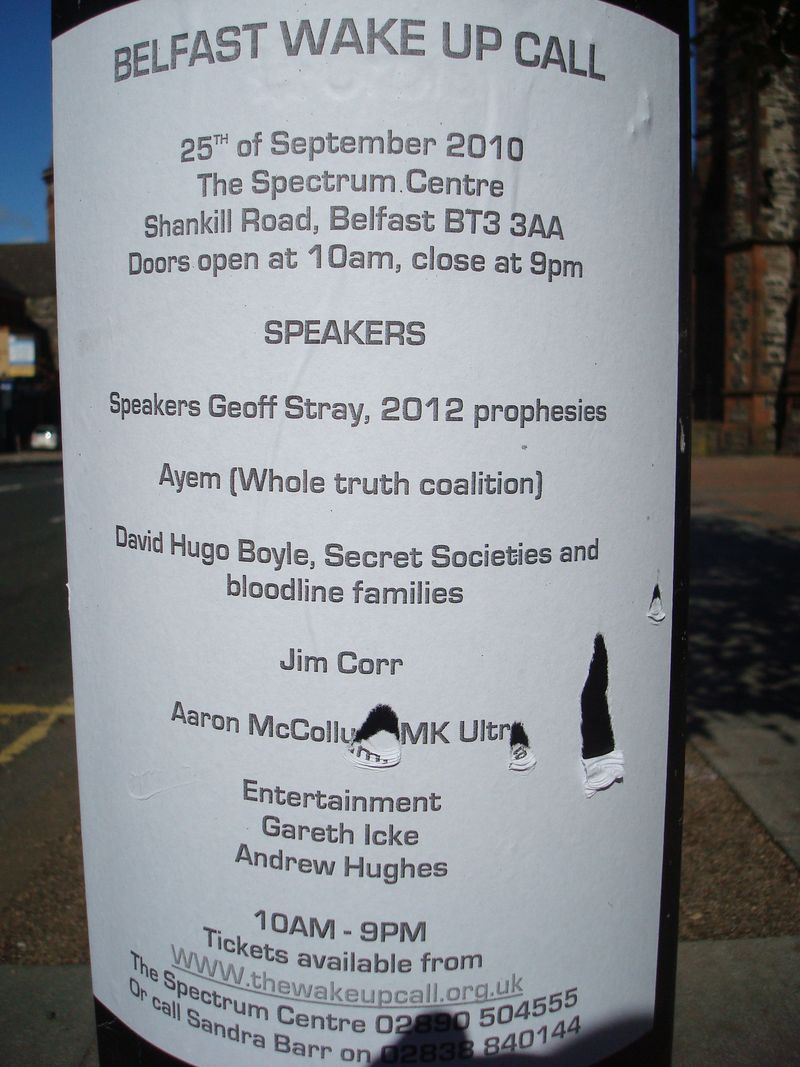 But what of the balance and cross border initiatives that we have come to expect in the new Northern Ireland?

I am pleased to announce that next week Belfast Wake Up Call will relocate to the Falls Road, with the following speakers booked:

Annie Machon "The Need for a Modernised and Fit For Purpose MI5"
David Shayler "Were The Jews behind The Northern Ireland Troubles?"
Chris Bovey alias Dr Hemp "Why Republicans have nothing to fear from drugs in their communities"
Reinvestigate 9/11 (Speaker tbc) "The Path To Truth: Lobbying MP's at Westminster"

All talks will be simultaneously translated into Gaelic, with Ulster-Scots also available upon written request.

Tomorrow is the ninth anniversary of Al Qaeda's attacks on the United States.

Each September 11th now sees a series of ceremonies in the United States, television documentaries and - on the other side of the fence - a spurt of activity from 9/11 'truth' activists attempting to get their message (or more accurately messages) into the public domain.

In London Reinvestigate 9/11 is holding an event at the Passing Clouds venue in Dalston. This centre has recently taken down the 9/11 'truth' graffiti that once adorned its frontage, but sadly still encourages the 'truth' narrative. According to its website Reinvestigate 9/11 and Passing Clouds are holding one of no fewer than 20 events across London on September 11th, questioning the established version of 9/11. An email from Ian Henshall of Reinvestigate 9/11 states "for a full list see http://truthrising.org/events/".

And when you check the details of the '20' events? Twenty turns out to be four actual events, with 'information points' bringing the total up to twenty. In other words a pile of leaflets on a table. Clearly Ian Henshall, Reinvestigate 9/11 and We Are Change are about as good at maths as they have been at establishing that 9/11 was an 'inside job'.

'We Are Change' Caught Out

Life can be pretty lonely for truthers.

How else can you explain the blatant dishonesty of We Are Change, claiming an event that they are organising is supported by the Stop the War Coalition, when it is not?

Full marks to Stop The War however for this robust response:

"For the record, we consider groups such as these to be, at best, a distraction from our central focus of ending the war on terror, and at worst they can drift into anti-semitism. I have now written to them demanding that they remove any reference to Stop the War coalition."