The Conspiracist Beliefs of Larossi Abballa?

There will be much more to come on the religious and political affiliations of French jihadist Larossi Abballa, killed by the French police in Magnanville on Monday. Abballa had seemingly murdered two French police officers and held their three year old child hostage.

The use of live social media during terrorist attacks is an emerging phenomenon - during the December 2014 Sydney coffee shop siege, Islamic State supporter Man Haron Monis uploaded onto You Tube videos of his hostages, and also allowed those held in the store to update their Facebook accounts. The videos were quickly taken down by You Tube, although I have one screenshot
Download Joel Herat - YouTube at 1220 uk time 15 12 2014(pdf).
In Toulouse in 2012, Islamist gunman Mohammed Merah filmed his own attacks, sending a memory stick to Al-Jazeera shortly before he was killed.

Abballa appears to have built on this trend, live streaming a statement from the murder scene on Facebook. This was then turned into a slightly shorter video by Islamic State's media department. Also in his Facebook update was the very odd image below, where he appears to be expressing concern about Freemasons, and occult imagery being used to promote the European Football championships. 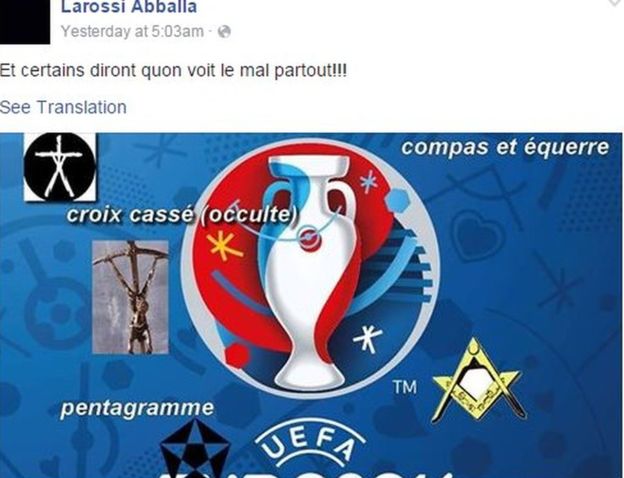 Such concerns represent an interesting area where Islamist, jihadist and western conspiracist beliefs appear to overlap. Earlier this year in the US we saw a police investigation into an alleged jihadist plot to carry out a terrorist attack on a Masonic hall in Milwaukee. Sadly masons now need to be added to the long list of potential victims of jihadist actors in the west.

This occasional feature looks to bring together some of the articles and issues which have either caught the eye of 9/11 Cultwatch, or have been passed to us as important, by our contributors. If you see something that you feel may interest us, do contact either Paul Stott or Larry O’Hara.

In historical terms it has arguably been very difficult to discuss conspiracy theory without reference to anti-Semitism. As part of a wider examination of ‘The Jewish Question’ the Spiked on-line magazine ran an editorial on 3 February considering how contemporary conspiracy culture has made anti-Semitism respectable. We might add that it is such conspiracy thinking, along with the rise of Islamism, that gives contemporary anti-Semitism its impetus in Britain.

Over on the political right, the Gatestone Institute reported on 6 February that French Front National leader Marine Le Pen is guided by her Foreign Policy Advisor, Aymeric Chauprade. Little known in the UK, Chauprade was dismissed from his lecturing position at the French Military Academy in 2009, after adopting what could be seen as a conspiracist position on 9/11. There appears very little in English on or by Chauprade – for example all 22 links on his Wikipedia page are in French, as are all of the weighty articles comprising his collected works. This American far-right blog appears about the best English language source available, and quotes Chauprade thus:

“It’s true that I present the theory (of an Israeli-American conspiracy) in a favourable light, but I don’t say it’s my position. I wanted to show the opposition between two ways of seeing the world, aware that half of humanity thinks the 9/11 attacks were the result of a conspiracy, and not the work of al-Qaida Islamists.” 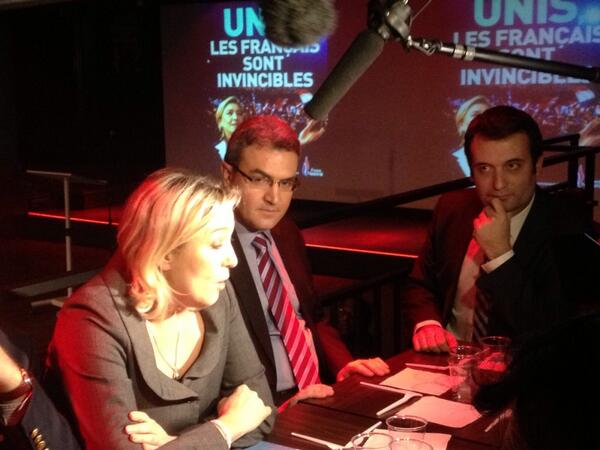 With advice like that, Ms Le Pen is going to get worse, not better.

Staying across the channel, the comedian  Dieudonne has featured on this site on a few occasions, due to his past association with 9/11 truther Thierry Meyssan and his anti-Zionist party. There is clearly money in jew-baiting – a police raid has uncovered 650,000 Euros under the bed in Dieudonne’s home. All those comparing him to Bernard Manning were clearly in error. If Dieudonne has a British inspiration, it is surely the Inland Revenue’s greatest opponent, Knotty Ash comedian Ken Dodd?

French Government Gets Itself In A Mess Over Meyssan's Party

Grim news from France, where the anti-zionist slate, including 9/11 truther Thierry Meyssan, have the French government in a right muddle, following their candidacy in the European elections.

9/11 Truthwatch's French correspondent points out that concern has centred not around Meyssan, but Dieudonne, a controversial figure in the country. She comments:
I've just read again the article in L'Express and other websites including L'Humanite, Communist paper as you know.  Mainstream left wing parties have been claiming that The Elysee is not all clear in its real aim for wanting to ban Dieudonne and the French government has been accused of all sorts, from the whole spectrum of wanting to make anti-semitic views more popular down to making people feel that anti-zionist views are being victimised.
The communist stand is so predictable in that apart from its affiliation to its official anti-racist group it can often in my view be  very mild in its anti-racism.  It is also understandable why the other parties are very dubious about the real motive of the government.  Lunatic governement, the very one which recently chose holding meetings on immigration in the city of Vichy- for fuck sake - claiming allegedly that they chose the city precisely to show that history was moving on.  To every one who can see truly through their politics this appeared quite... well I don't know, words quite frankly fail me here.
Banning - or attempting to ban this slate - is no substitute for taking these guys on in debate. 'Truth' theories need to be taken on and defeated, whether they cloak themselves in 'anti-zionist' garb or not.

Usually British voters give the European Union elections a stiff ignoring. Will the same happen in France on 5 June, where one of the first 9/11 'truthers' is standing on an 'anti-zionist' slate?
Thierry Meyssan, best known for his theory that no plane struck the Pentagon on 9/11, is in bed with some pretty dubious characters. Standing in the Ile de France district, which takes in Paris, the Anti-Zionist List includes the anti-semitic actor Dieudonne M'bala M'bala, Alain Soral (who has been in both the French Communist Party and Jean Marie Le Pen's Front National) and the Islamist Yahia Guasmi.
Given Meyssan reportedly lives in the Lebanon, French electors may consider his commitment to their constituency is a tad questionable, but this whole thing smacks of a big publicity stunt. Albeit it one with some considerable ego's united, however briefly.
More to come on this!