This evening Reinvestigate 9/11, the 'truth' organisation headed by Ian Henshall, has circulated supporters with a press release concerning Michael Meacher, the late MP for Oldham West and Royton.

This mostly focuses on parts of Meacher's back catalogue most in the Labour Party politely ignored (his views on 9/11, his giddiness about the Bilderbergs) and makes the very sweeping claim that Meacher, a buy to let landlord before it became fashionable, was "in many ways the intellectual powerhouse behind the insurrection that saw Jeremy Corbyn elected leader of the Labour Party this summer."
We are also reminded that John McDonnell is not the only Labour MP to entertain 9/11 conspiracists in the House of Commons - Michael Meacher had been doing so for many years, right up until his recent death.

The really odd stuff comes towards the end though, and serves as a neat example as to how the conspiracist mindset operates. R911 write:

"News reports have given no details of the cause of Michael's unexpected death beyond a statement from Peter Dean, his constituency office manager, who said: "We are extremely sad and it has been quite a short illness he has had and we just don't know the details at present. Ian Henshall an organiser of Reinvestigate 9/11 said: "I hope that, to put to rest any lingering doubts, his aides will take a close look and divulge full details of what happened."

Whose lingering doubts? What doubts? We are not told, but the impression, that Meacher'a death may be suspicious, is ever so subtly placed in the readers lap. From there, the story can run and run.

The full text of the R911 press release, plus an article asking "Was British MP Michael Meacher Murdered to Cover Up 9/11?" may be viewed here, courtesy of the ever excitable Veterans Today website.

The Sunday Times has today run a major article on John McDonell and his engagement with leading activists in the 9/11 'truth' movement. Sounds familiar? 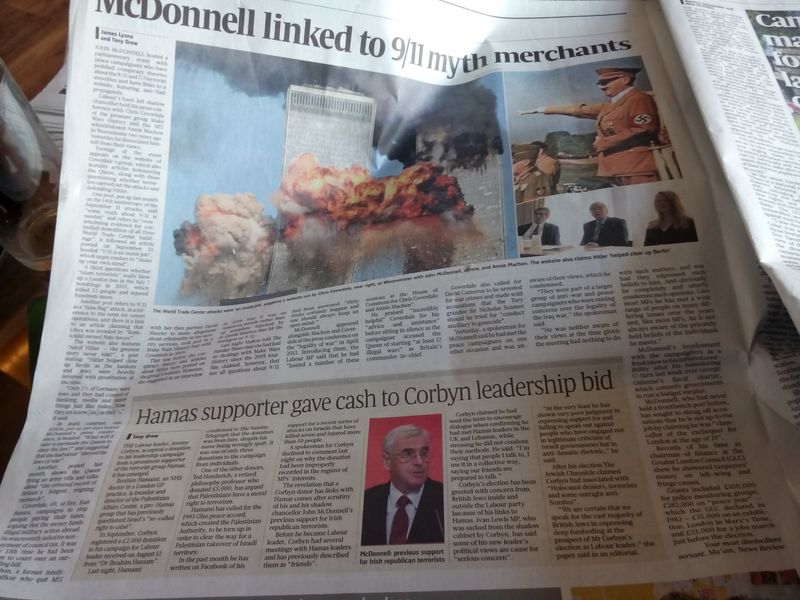 It certainly is familiar to readers of this blog. As far back as September 16th, we examined some of the "Curious Friends of the Shadow Chancellor and Labour Party leader." Nobody from the Times has been in touch since, but there article does seem an example of the old maxim that imitation is the sincerest form of flattery.