Shaylerwatch - On Guard This Friday!

It appears David Shayler will be out making a fool of himself again this Friday.

However, this article from the Independent suggests that his subject matter will be more spiritual than 9/11.

Scroll down the article at the link here, to find out more!

A History Of The Car Bomb

Sunday 27 July sees the first of a two part series on that most urban of weapons - the car bomb.

Presented by ex-spook Robert Baer, Car Bomb is at 7pm on Channel 4.

One of the more interesting websites currently looking at US and international affairs is Truthout.

To take one example, J Sri Raman has provided this fascinating insight into the attack on the Indian Embassy in Kabul on 7th July this year. Raman gives us a view on the association with terrorism in the region of both the Indian and Pakistani governments.

This 7/7, may yet have far more important consequences than the 7/7 bombings that occurred in London.

Facing Two Ways At Once

Speak to most 9/11 truth activists about Pakistan and Saudi Arabia, and several comments are always repeated.

The Saudis are bosom buddies of the Neo-cons. Pakistan's government and security services are little more than patsies for George Bush, incapable of independent action. In conversation with Ian Henshall (one of the more rational proponents of this thesis) at the Green party conference last year in Swansea, he seemed incapable of even considering the possibility that reality may be slightly more complicated.

All the more interesting then to hear that Ahmed Rashid has published a new book, "Descent Into Chaos: How the war against Islamic Extremism is being lost in Pakistan, Afghanistan and Central Asia".

Reviewing the book in yesterdays Telegraph, Sameer Rahim stresses how President Musharraf was able to repeatedly piss Bush about, delivering some Al Qaeda leaders to the Americans, whilst leaving others in place. A similar mixed bag emerges from 'regime change' in Afghanistan, and the rule of Hamid Karzai.

To 9/11 truthers of course, this will be 'proof' that Al Qaeda is a US front (but not oddly enough that it is a Pakistani front!).

Closer to the truth may be that Pakistani politicians can be just as duplicitous as western politicians, and that Musharraf, regardless of the relationship he wishes to have with George Bush, has to deal with reality. That is: the views of the Army, ISI and perhaps even the Pakistani populace is far more in favour of Al Qaeda than it is of the United States.

President Musharraf has been facing both ways for many years.

A debate on the 7/7 bombings on this site now runs to a whopping 32 posts!

In the 2007 issue of Notes From The Borderland magazine, Larry O'Hara and myself critically reviewed two DVDs covering the London bombings, Ludicrous Diversions and Mind The Gap.

The purpose of this posting is to remind 7/7 truth activists of a long standing offer we have made them. To quote from one of Larry's posts on the above thread:

The 7/7 campaign talk of evidence--yet for nearly a year now there has been an open offer to them to respond, for (uncensored) publication to the review in Notes From the Borderland issue 8 of the DVDs 'Mind the Gap' and 'Ludicrous Diversions'. Should such a response not be forthcoming (and it still isn't too late for issue 9), the conclusions to be drawn by interested parties are obvious.

The deadline for issue 9 of NFB is Sunday 31st August. Don't be shy!

Today's G2 section in the Guardian is enlivened by a piece by Charlie Brooker, attacking the absurdity of 9/11 'truth' theories.

He draws the eminently sensible conclusion "a conspiracy this huge would be impossible to pull off".

Yes but imagine - without 9/11 we would never have had the joy of encountering Loose Change,Dylan Avery and his Kevin the Teenager act........

You are all going to love this one!

All spelling and punctuation is as per the original.

As 9/11 TRUTHER'S we do not believe the proven liars such as Bush,Blair,ect.We instead believe the ones who were there on 9/11.We believe the trained in explosives firemen,police,and emergency workers whom in vast MAJORITY have stated,"There were BOMBS going off".We also believe in basic science as those planes were absolutely incapable of turning those buildings to dust.We also believe the seismology read out from Columbia University from that morning that registered the BOMBS going off.We also see whom has greatly benefitted from that attack.We know the wars were built on lies and that they were designed in the 1990s as well as the ill named Patriot Acts.We also see how the unlawful American government has treated those first responders as they are the witnesses to the largest murder in American history.We also know there has NOT been a criminal investigation into the largest murder in American history,WHY???
So if you want to believe the unlawful American governments FAIRYTALE and you wish to believe the PROVEN LIARS then go ahead.If you wish to call people such as us little girly names such as,anarchist or cultist,thats fine just be prepared to prove your claim's in a court of law.We are only interested in the truth sir as we believe that truth is NOT afaid of scutiny.
Sincerely,Steve Miller

Channel 4 return to the issue of 7/7 this evening.

"7/7: The Angels of Edgware Road" concentrates on some of the efforts made by commuters to assist there fellow passengers.

The programme starts at 7pm.

Derek Jameson Returns - Do They Mean Us?

Cor blimey, I see our friends across the water are getting a bit excited!

It seems that over at Prison Planet, they are getting their knickers in a twist about 9/11 Cultwatch addressing the Anarchist Studies Network conference in September.

I wish they would get it right! 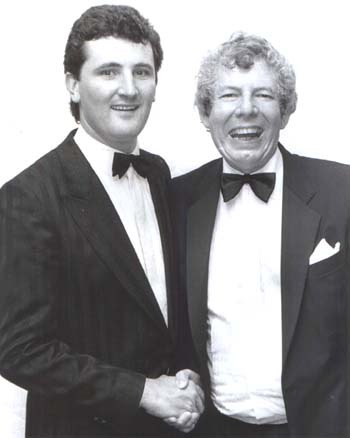 The results are in from the Haltemprice and Howden by-election.

David Icke, a hero to much of the 9/11 truth movement, and standing on a platform that included his commitment to 'truth' ideologies weighed in 12th with a magnificent............ 110 votes. Amongst those he finished comfortably behind was Mad Cow Girl of the characteristically unfunny Monster Raving Loony Party.

9/11 Cultwatch have already commented on the paucity of Icke's credibility, and indeed the cheek of ex-SAS man David Davis posing as some form of libertarian. We do not expect to see Davis return to Parliament and produce anything more than hot air as he stews on the Conservative backbenches.

Oh - and the whole affair has apparently cost the taxpayer £80,000. Rather than seeing Mr Davis grandstanding, that money would have been better spent on public services.

Joining in the debates and discussions, to be held between Thursday 4th and Saturday 6th September, will be 9/11 Cultwatch's Larry O'Hara and Paul Stott.

You can find more details of the presentation "Half Truth Movement - The Dangers of the 9/11 Truth Cult" here.

Today marks the third anniversary of the 7/7 terrorist bombings in London.

Sadly the 9/11 truth movement quickly spawned an unwelcome stepson - the 7/7 'truth' movement, which seeks to blame the 7/7 bombings on anyone but the actual perpetrators.

This evening at 9pm Channel 4 feature the atrocity committed by Germaine Lindsay, whose suicide bombing killed 26 people between Kings Cross and Russell Square. "7/7 The Miracle of Carriage 346" can be viewed at 9pm.

Ahead of the BBC Conspiracy Files programme this Sunday, the Beeb are trailing several articles to promote their programme.

One, is describing the 'mystery' of WTC 7 as 'solved'.

But to describe any issue surrounding 9/11 as 'solved' is to fundamentally mis-understand the mindset of the 9/11 'truth' movement. Osama Bin Laden could walk into the front room at Belinda McKenzie's Highgate home tomorrow, confess all and explain exactly how it was done, and the UK's 9/11 truth activists would still be in denial.

Whatever impact the BBC's programme has this weekend, one thing is for certain. It will do little or nothing to derail the 'truth' movement or its activists............

Anything Before But, Is Bullshit

Hello to former MI5 officer Annie Machon, who appears to be undergoing yet another re-branding.

Judging from her website, Ms Machon now appears to be reverting to her earlier guise as a serious commentator on security and (cheeky!) civil liberty issues. Take this quote on the UK and Ireland 9/11 Truth Movement:

"For the past few years I have also been involved in the 9/11 Truth Campaign. Before you all run for the hills, I want to state very clearly that I am not interested in speculating about the wilder theories about what happened that day. However, I do believe that there is an urgent need for a new and independent enquiry into these tragic events."

Can we expect Agent Annie to continue travelling back in time, perhaps to her 2005 "reds under the beds' stories in the Mail on Sunday, with Ms Machon warning of the dangers of Tony Benn and his leftie mates selling us all out to the dastardly Russians?

Or will she revert to her 1997-2005 pose, that we need a strengthened, modernised MI5 to protect us from all these dastardly terrorists out there threatening our national security?

Come on Annie - over to you!