At most 9/11 'Truth" events in London, author of "The 4th Bomb", Daniel Obachike can be found hawking his wares.

Would the remainder of the book stand up to any similar scrutiny?

EDITED TO ADD: It seems the 9/11 Truth Movement site has temporarily (we hope) taken down Ms North's article. As it was clearly relevant to debates around 7/7, lets hope it is reposted as soon as possible.

"Paranoia does not endorse a particular 9/11 theory, and encourages critical analysis of all 9/11 theories".

Issue 45 of Paranoia: The Conspiracry and Paranormal Reader.

Whilst it is tempting to be cynical about this quote (what better way to build the 9/11 'industry'?) it is hard to be opposed to critical analysis in any shape or form. The question is, when you look at the 9/11 'truth' movement, is critical analysis what is really happening?

One of the most common fallacies running through 9/11 "truth" literature is the portryal of 9/11 as some sort of year zero.

All manner of bad things derive from 9/11 and would not have happpened but for the opportunity 9/11 gave the neo-Cons. This is usually followed up by the assertion that the US government therefore carried out 9/11, or allowed it to happen, to facilitate these actions.

Recent revelations from Copenhagan however, indicate that one policy abuse - that of extraordinary rendition - predates 9/11 by at least six years. Way back in 1995 an Egyptian terrorist suspect, Abu Talal, was kidnapped in Croatia, taken to Egypt, and probably executed there.

Don't expect a retraction from the truth seekers though!

How One Conspiracy Theory Began

"I am staggered to realise that there are some people who believe that the lunar landings never happened, and that the whole Apollo programme was faked by NASA. The idea came from a science fiction film, Capricorn One, with which NASA was sporting enough to collaborate, but nobody in their senses expected this sort of thing to be taken seriously."

There's Nothing Wrong With Healthy Competition

Back in the 1990s Searchlight magazine launched a sustained campaign of harrassment and abuse towards Notes From The Borderland editor Larry O'Hara.

This picture, from Borders on Charing Cross Road, perhaps illustrates the extent of their failure............. 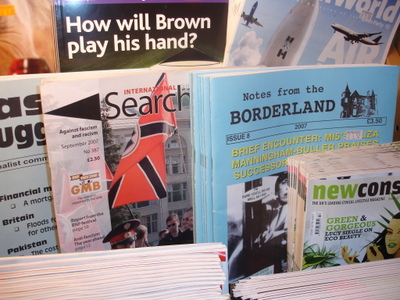 Discussion In Class War About 9/11

The winter 2007 issue of Class War has recently been published.

Smoked Out? Flushed Down The Shitter Along With Class War?
Dear Class War,
I just got round to reading issue 91 after buying it at the Trident demo then misplacing it. I was having a right good giggle ‘til I came to the Letters Page and read the letter from Ranting Prick (and your supporting reply).
To start with, I don’t smoke weed every day ‘til my head’s pickled. I can’t fucking afford to even if I thought it was a good idea. I can’t afford Internet either, so don’t call me a fucking conspiraloon. You bullshit the idea that 9/11 and 7/7 were inside jobs carried out by elements of the state. Oh no no no, it was done by Islamofascists, ‘cos Class War says so.
I’m not a drug fascist either, and enjoy mushie season too, especially ‘cos they’re free. I just don’t have time to go deep into conspiracy theories. I don’t believe in space invaders or any of that bollocks either. And no, I don’t see government agents in my breakfast either, but surely the deeper mistrust of governments the better?

Whether it be a capitalist government or communist government, who gives a fuck? We hate them all, whatever their systems of oppression are (the US government admits they put Mao into power) they’re all fucking leeches. All of the 20 some things we have helped radicalize read it and say what about the plethora of evidence? If the pigs had a fraction of that evidence against us we’d all get big bird! I thought you said anarchists in Britain were open minded?

I’m afraid you’ve lost a small army of supporters around here (and probably around the country) Fuck what you say, we’ll keep on fighting for Anarchism, a large part of that Nazi-bashing. Since I was a pee-wee I have trained in traditional Karate, roughly 30 years every night except Saturday and Sunday) and believe me its truly a joy to see slightly built women pulping big scary Nazi arse skins!
As for Shayler and his bitch, I know she claims Class War fell apart after they withdrew support for their MI5 infiltrator, but I know Class War kept going for at least 3 years after that. Yeah I’ve read her book and she’s so full of self-importance I’m surprised she hasn’t disappeared up her own arse! I hope we bump into her when she comes up north, our lass can give her the hiding she deserves.
To finish, when you look at all the evidence but despite that call us delusional, people are coming to the conclusion that you’ve been infiltrated again! Bet you won’t print this you fucking cowards.

Gaz, Rhyl.
PS. Of course there are religious nutters and bigots, who the fuck said the world was inhabited by fluffies?

CW Reply: Hi Gaz. We are always sorry to lose supporters, but we have to say the “army” of unhappy class warriors you mention is a fallacy – yours is the only letter we have had on the subject of 9/11.
It is not merely Class War that says Islamists were responsible for 9/11 and 7/7 – you can start with the 7/7 perpetrators themselves, two of whom produced “suicide” videos released by Al-Qaeda after the attacks. Or do you believe they were both forgeries?
In the case of 9/11 two its organisers – Khalid Shaikh Mohammed and Ramzi Binalshibh provided significant details of how and why Al Qaeda planned 9/11, to Al-Jazeera journalist Yosri Fouda, in 2002. Add Bin Laden and al Zawahiri’s praise for the action, and you have a position far more credible than the conspiracy theories being put forward by the 9/11 “Truth” movement.
Politically, surely Class War should be criticising George Bush, Tony Blair and Gordon Brown for what they have done, not what they have not? Muddying the waters with crankish ideas makes radical change harder, not easier.
Finally you mention David Shayler and Annie Machon. That these two characters were taken to the bosom of the UK 9/11 Truth movement, after a very late ‘conversion’ to the cause, shows the gullibility of many people in that field. Given Shayler’s recent decision to announce he is the Messiah, and the substantial damage he has done to the 9/11 “truth” cause, all we can say is we told you so.
Oh – and if like us you really have had enough of the 9/11 conspiracy theorists – do check out the website www.911cultwatch.org.uk

Andrew Johnson, one of the former moderators of the 9/11 Truth Movement's popular forum, has taken his bat and ball and walked out, after yet another disagreement in the ranks of 'truth' movement. It seems Johnson's posts were being edited by other moderators, and his belief in "No Plane Theory" was too much for some.

He has now set up his own forum here. Whether the debate will be any more rational on this new site remains to be seen - it would be nice however if it were a little less anti-semitic.

I attended this meeting yesterday in central London.

Here's my report on the speeches.