Total:Spec On The 9/11 Truth Movement

Hello to readers of Total:Spec magazine.

The May 2007 issue of Total:Spec contains a major six page article on "9/11 Untruths" and an interview with 9/11 Cultwatch writer Larry O'Hara.

The article focuses on the cult-like behaviour of 9/11 "truth" activists and the reaction whenever there beliefs are threatened. You can buy Total:Spec in most big newsagents, or order it directly from their website.

Ziauddin Sardar on Pakistan: Between The Mullahs and the Military

One of the key factors for anyone studying 9/11, and indeed the "war" on terror, is Pakistan.
With the possible exception of Saudi Arabia, no country has been as central to both Al Qaeda and the USA.

Over the years the Channel 4 Dispatches team have produced some extremely dubious documentaries (for example the 1994 "expose" of fascist violence in Yorkshire) Let's hope that Monday evenings programme, where author Ziauddin Sardar examines the balancing act between the military and religious leaders in Pakistan, is a good deal better.

Dispatches:Between the Mullahs and the Military is at 8pm on Monday 23 April.

Head Down And Charge - No Matter How Tasteless

Well, the bodies were not even cold in the US University massacre, before oddball researchers were leaping up and down.

Alex Jones, one of the leading 9/11 "theorists" has published this article on one of his websites.

It is a typical article from his circle - conjecture, bile and paranoia are coupled together in an indecent rush to reach conclusions without any serious investigation or analysis.

In this world, the authors premise is their conclusion, everytime.

And they call themselves researchers!

Class War On The "Truth" Movement

The summer 2007 issue of the anarchist tabloid Class War has an article dissecting the 9/11 "Truth" movement. You can read it below:

9/11 Conspiraloons Opposed
One of the daftest set of theories out there comes courtesy of the “9/11 Truth Movement”. These are the jokers that try to convince the world and his wife that Osama Bin Laden was not responsible for the September 11 2001 terrorist attacks in New York.
In the UK a strange mixture of conspiracy theorists, ex-spooks (including that old red baiter David Shayler) anti-semites, new age greens and Muslims unable to accept their co-religionists ever do anything wrong, have joined forces in the UK and Ireland 9/11 Truth Movement.
They want us to believe that anyone from Mossad through to George W Bush himself was responsible, and even that the Twin Towers were not hit by planes at all but by holograms, whilst explosives planted inside the towers brought them down.
This nonsense is easily laughed off by the establishment, and of course Bush and Blair are quite happy to see people discussing conspiracy theories rather than the political issues that led the 9/11 attacks. Such as?
Perhaps all those years supporting and funding Islamist bigots as a bulwark against Communism was a bad idea. Perhaps sucking up to Saudi Arabia all the time – home to 15 of the 19 hijackers – was not such a good idea either?
This year has seen the beginnings of a backlash against these clowns, whose cult-like behaviour and dismissal of anyone who disagrees with them as “gatekeepers” is as annoying as it is telling. Expect to see Class War dismissed as “fake anarchists” or “Anarchist gatekeepers” as a result of this article.

To view some of the counter arguments from people tired of such conspiracy nonsense visit 911 Cultwatch.

Why The Left Must Ignore The 9/11 "Truth" Movement

Last week saw a letter in The Weekly Worker extolling the virtues of the 9/11 Truth Movement.

We believe the last thing the British left should be doing is getting into bed with this cult. See below the original letter sent to the Weekly Worker, and the 9/11 Cultwatch reply, sent on 6 April 2007.

Gordon Downie writes: “As the Bush regime prepares to fabricate yet more reasons to attack another Middle East state, one may legitimately question any time spent analysing the superstructural phenomena discussed here” (‘Soundtracks for a new American century’, February 15).
Isn’t it about time the Weekly Worker gave some view on the growing belief that 9/11 was an inside job, proved not least by the ludicrous claims that three super steel structures could defy the laws of physics and collapse at the speed of gravity through fire? Why the silence on such a burning question? Surely the cultural phenomenon of the 9/11 truth movement deserves some recognition or discussion. I have trawled your website’s search facility to no avail.
Tam Dean Burn via email

The Weekly Worker (and socialists generally) would do well to give 9/11 conspiracy theories a wide berth (Tam Dean Burn’s letter, WW 5 April 2007).

A look at the UK 9/11 “Truth” Movement reveals an unholy alliance of ex-spooks, anti-semites, plus Muslims unable to accept the reality that there are some members of their community, influenced by Wahabbist ideology, who do indeed support, and in a few cases have carried out, bombings like 7/7 and 21/7, and the nuttier fringes of the green and New Age movements.
Add to this the bizarre cult-like behaviour of 9/11 “truth seekers” (where 9/11 truth advocacy is seen as some sort of “year zero” that trumps every other political cause, at all times) and you have a movement that should be avoided like the plague.

The Bush/Blair project can only be beaten politically. That means building progressive political alliances and carrying out serious investigative research into the work of our enemies – we have a web-site 911cultwatch.org.uk devoted to doing exactly that, and explaining why the 9/11 “truth” movement is a growing part of the problem, not the solution.
Sadly such concepts of research are alien to Mr Dean Burn and his cohorts.

Captions please for this delightful little picture from the 9/11 Truth Movement's picket of the US embassy last September.

All entries received by 1st May will go into our prize draw, with a top prize to be selected by Heidi Svenson's fair hand. As someone once said (possibly) - let's roll! 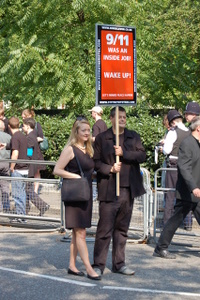 Come And Have A Go If You Think You're Hard Enough

There's no doubt which forthcoming book we are most looking forward to.

May sees publication of David Ray Griffin's new book "de-bunking the 9/11 de-bunkers". Whether or not he turns his gaze across the Atlantic towards 9/11 Cultwatch is not yet known.

All we can say to the Reverend of conspiracy theory is - come and have a go if you think you are hard enough!

Film To be Made About Lockerbie Bombing

One person who will be a little nervous at this prospect is former MI5 officer and leading 9/11 fantasist David Shayler.

As one of the few commentators left who believes the Libyan's did it, perhaps Shayler could get some much needed work by working as a scriptwriter on the film?

Why Shayler so slavishly follows the MI5/government line on Lockerbie, but not on events like 9/11 or 7/7 is of course a matter between him and "truth activists".

Details of the proposed movie are here.

Conspiracy Theories To be Amended

We have touched previously on the fact that a lot of the arguments of the 7/7 "truth" movement actually appear to be worse than then those of 9/11 "thinkers".

It will be interesting to see how today's serious charges brought against three 7/7 suspects is adapted and placed into some of the more eccentric explanations of 7/7.

Can we expected more on the Hackney/Masonic connection? David Shayler and Dave Starbuck giggling about the Balfour declaration and the number 30 bus bombing? Come on guys, we could do with a giggle!